Unit testing is considered one of the most effective ways to ensure validating all functionalities and features of an application are working as expected. They are carried out in the development stage of an application and this case smart contracts. Unit testing with hardhat contracts gives you the tools to ensure your contract is working fine and efficiently test your contract.

On completing this tutorial, you will learn everything you need to know about writing effective unit tests for your smart contracts.

Throughout this tutorial you’ll need to have worked with or have a basic knowledge of the following;

This tutorial also aspects that you have the following already installed or available:

Installing and setting up Hardhat​

Now that you have successfully installed and Setup up your hardhat development environment. next you will create the exemplary contracts you’ll need to write unit tests for.

After starting up the hardhat development environment you’ll notice a new folder structure appears in your workspace explorer like in the image below.

This file structure comes with a sample Lock.sol contract inside the contract folder and a Lock.test.js script inside the test folder.

Running tests on contracts usually requires you to run your trial a couple of times, therefore, deploying and running your test script on a MainNet or Testnets can be rather costly and also time-consuming.

Throughout this tutorial, you will be deploying and running your contract’s tests on the hardhat’s local network to save time consumption and real cost. To understand how unit testing works on smart contracts, run the command npx hardhat test. This will run a simulation test on the existing Lock.sol contract which will return a result like in the image below. 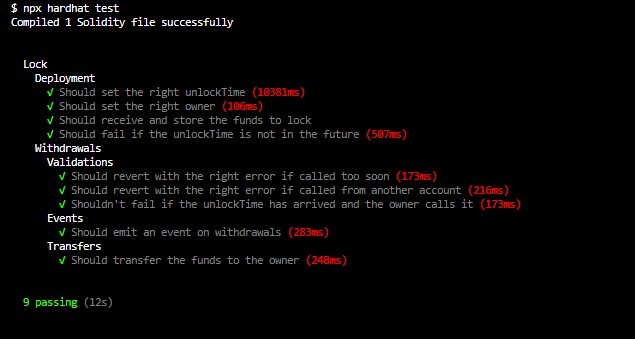 Hardhat compiles the contract first, runs all the tests in the test script, and returns the result of all the tests. The image above shows what the result looks like when it passes all the unit tests.

What is Hardhat Coverage​

Hardhat also comes with an inbuilt coverage functionality that runs a tabular representation of your contract test and other features of the contract’s current state test. Run the command npx hardhat coverage. A successful result will look exactly like the image below. 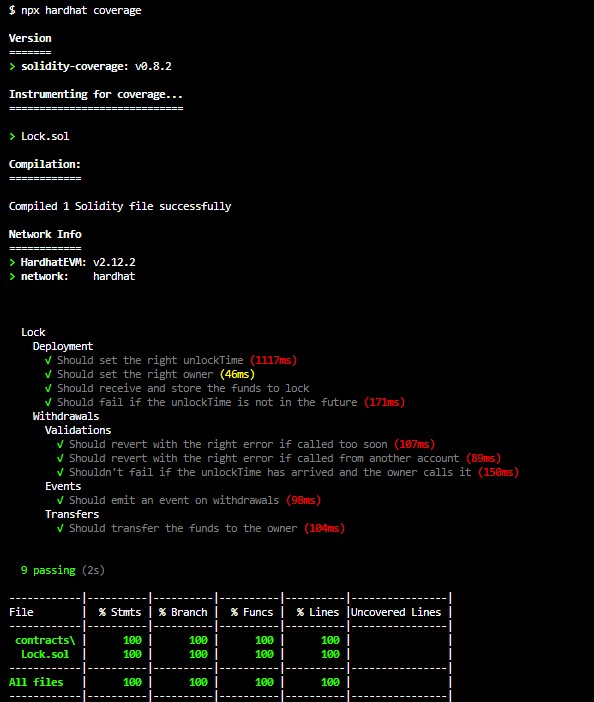 Note: Here is a link to a more extensive read on hardhat coverage.

Every contract test created is always written specifically to test a single contract meaning, if you have four different contract files in an application, your application should also have four test scripts for testing each contract. In the next few steps, you’ll be creating an exemplary smart contract which you’ll, later on, be writing a test script for.

Note: If you’re new to solidity and creating smart contracts, check out this tutorial to get started and understanding solidity code. The tutorial above also has a couple of functions that will help you learn how to write solidity code.

a. After initializing the contract, the variables owner and fav_num are also created, and by default, each has no value.

b. Next, the contract has a constructor that assigns the address of the contract’s deployer to the owner variable and assigns the value 200 to fav_num. add the code below to update your contract:

c. The next function store simply takes an input and updates the value of the fav_num to the input integer value. Add the code below to update your contract:

d. The next function retrieve simply returns the current value fav_num. Copy and add the code below to your contract:

e. The next is a modifier function isOwner that requires whoever is calling its parent function to be the owner(deployer of the contract), or the function will be reverted. Copy and add the code below:

f. The next function changeOwner takes in an address as an argument and uses the previously created modifier to only allow the owner of the contract to call the function to switch the owner’s role to the input address. Copy and add the code below to your contract:

g. The next function fundIn allows anyone to deposit a minimum of 0.01 ETH into the contract or else it reverts the function call. Copy and add the code below to your contract:

h. And finally, the last function withdraw accepts an input _amount it requires the amount value to be a maximum of 0.1 ETH else it reverts the function without a message. Copy and add the code below to your contract:

On completing your Sample.sol contract, Your smart contract should look exactly like the code below, You should update your contract with the code below for uniformity's sake:

Now that you know the different functions in the sample.sol contract and you’re familiar with what they do. Next, you’ll learn how to create a unit test script to test subsections of the contract you just made.

Now that you’ve created a simple contract with solidity you can now get started with writing your unit tests to suit the contract. After completing these tests you’ll have a basic idea of how to create unit tests for smart contracts.

A very common pattern used when writing unit tests for smart contracts is:

In the next few steps, you’ll be creating a uint-test to test your sample.sol contract using the previous format above, and you’ll learn how to create a basic unit test script on your own:

Testing a smart contract makes it easier to identify bugs and vulnerabilities and reduces the possibility of software errors that could lead to costly exploits. In the next few steps, you will learn the basic format of how to write unit tests based on your smart contract.

The code above is created to simply deploy your Sample.sol contract. Next, navigate to the Lock.js script in your test folder and rename the file to sample.test.js.

From the code above, the describe keyword creates a global test for the sample.sol contract, and immediately creates some variable that you'll need later when testing other units of your contract, (visible in the global scope).

a. The first test for the constructor checks if the owner variable is equal to the deployer’s address, and the fav_number is equal to 200. Copy and paste the code below:

Now run the command npx hardhat test to run the test, which should return a result like the image below.

Also run npx hardhat coverage, which should return a tabular representation of your contract’s tests like in the image below.

c. The next unit test changeOwner describes the test for the changeOwner function. To create a test for this function, after deploying, you need to call the function using another address that is not the owner's address, expecting the function to be reverted. And you’ll also need to test using the right address deployer passing in another address to switch ownership of the contract. Thus the code below:

d. Next, to test the function fundIn, copy and add the code below. The first test reverts an error if the funder sends less than 0.01ETH, and the second test case successfully sends the right amount of eth after the funder sends an amount of ETH.

e. The next unit test describes the withdraw function, the first test case reverts an address that is not the owner calls the function, and the other test case tests the function to make sure the right amount of ETH is withdrawn from the contract. Thus the code below.

Finally completing your Sample.test.js script, your code should look exactly like the one below, you can copy and update your testing code with the code below for uniformity's sake. When you run the command npx hardhat test this should be the result of the test. 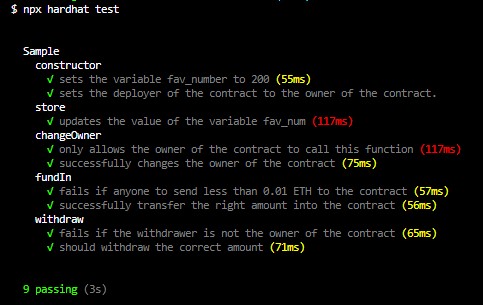 Run the command npx hardhat coverage and note the difference between the previous result from running the command and its recent run. 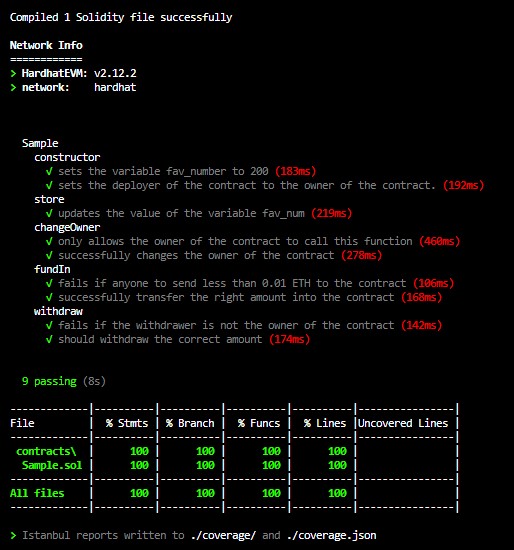 Writing unit tests for smart contracts can help a great deal in ensuring a secure and proficient contract, by suggesting fixes and improvements after discovering errors, issues, and security vulnerabilities in your contract. You have successfully created your unit test script for a simple sample contract. Now that you understand how unit tests are written you can move on to writing more complex test scripts for other smart contracts.

You can also read about how to run the unit test for smart contracts using Truffle. Here are some other tutorial articles you might be interested in.

A software Engineer and technical writer always open to working on new ideas. I enjoy working on GitHub and you could also find out what I tweet about and connect with me on Twitter

Here is a link to the complete tutorial sample code on my GitHub, Leave a ⭐on the repository if you find it helpful.